When I was a little girl, I remember a family member told me to be nice to one of my uncles because he had money.   I was somewhere between five and eight.   That advice didn’t sit well with me, so before I was 13, I was already out of the will.    No joke. He actually told me that.   I’ve never been able to kiss ass.   If I say something nice about someone, it’s because I genuinely believe it.
Anyhow, years later, I hit a rough patch at work for my inability to ass-kiss.   One of my bosses soon learned that if he wanted someone to blow up his ego, that person wasn’t going to be me.  But he also learned that when I thought something was great, I had no problem telling people how great I thought it was.   So what does this little story have to do with my music photography?  Well, had I not shared this story to someone who doesn’t know me, I would appear to be kissing ass.   This being my website, I don’t really need to explain myself, except that I want the world to know how great I think these people are, and know that I’m not just blowing smoke. 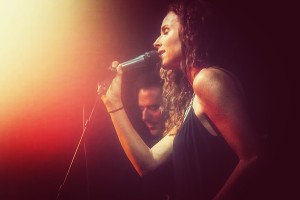 Minnie Driver:  So a few weeks back I was watching Return to Me, for the 3rd or 4th time.  I don’t remember if I had seen one of her pictures on the popular page on Instagram, or if I searched for her after watching the movie, but I saw that she was on Instagram and I thought, ” Love her. Follow.”   About a week later, she posted that she was going to be singing at Saint Rocke in Hermosa Beach.   My first thought was, “Minnie Driver sings?  Yes, definitely want to go see her.”  I commented on the picture, “Can I bring my camera?”   She replied, “Yes”.  I was totally stoked, but I kept pretty quiet about it because, although I love my photographer friends, I wanted to keep this one to myself.   Going there, I wasn’t sure what to expect.  I had never been to that venue, and I had never seen her sing before. Was I going to like her?  Was the lighting going to be good?  Was the venue going to be cool with me doing my thing?   But, at the show, all my fears were silenced.   It turned out to be a magical night.  She was lovely, adorable, and MAGICAL.  I couldn’t have been more stoked that I got to take pictures of that night.   The venue was also super nice.  The crowd wasn’t what I was expecting, but they were nice, too.  I came home excited to edit pictures into the late hours of the night, even though I had to go to work early the next day.  It didn’t matter how tired I was, I was on a Minnie high.  And then she actually liked my pictures, followed me back, retweeted me, and comped me for her next show.   Yes, I was totally on a high.  So not only was she a pleasure to shoot, but she turned out to be super sweet too.  It doesn’t get much better than that.  The next time I shot her was at Hotel Cafe.  I liked the pictures from Saint Rocke better, but I liked the show at Hotel Cafe even more.  At Saint Rocke it was standing only, so I was able to get around a little better without disrupting the audience.  At Hotel Cafe, the lighting was a little lower, and because they have tables in the front, I didn’t want to get in people’s way.   While I love taking pictures, I’m also a fan, and I know how it is when a rude photographer invades your space.  Whenever possible, I avoid being that rude photographer.  Overall, I hope these pictures I took capture at least one third of the magic that I saw before my eyes.   She really was awesome!  But don’t take my word for it. Go see for yourself.  www.minniedriver.com 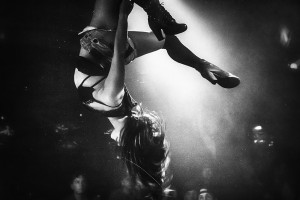 Little Miss Nasty:  The name says it all.  On the same night I shot Minnie Driver at Hotel Cafe, I shot Little Miss Nasty at Harvelle’s in Santa Monica.   What can I say? They were at opposite ends geographically and visually.  One was magical and lovely, while the other was in-your-face sex .  Literally, there was a point, or several where I had an ass in my face. (That’s not to say they weren’t magical, it was just a whole different type of vibe as you can see by the pictures.) These girls are hot, talented, and totally rock n’ roll.  If you see their “after” pictures with all the bruises on their knees, you see how much they put into their performances.  They give their audience everything and then some, so go check them out.  If you’re wondering how I know of Little Miss Nasty, let me give you a short backstory.  I met Gina Katon via Camp Freddy.  She was performing with the Darling Stilettos which opened for Camp Freddy.  She was always nice to me, so throughout the years, I continued following her.  Later, Gina started her own musical group, as well as began designing some awesome one-of-a-kind outfits (Rotten Couture) and also does Big Ass Bows.  Anyone who is out there hustling, and doing what they love, has my mad respect.  Once I slim down a bit, and have the extra money, I plan to commission her to make me an awesome one of a kind, sexy, black, photographers dress.  It’s going to be awesome! 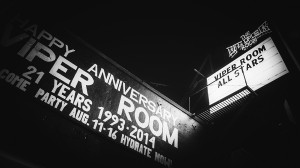 The Viper Room All Stars: About two weeks ago, I got to do my thing at the Viper Room.  It was for the Viper Room’s 21’st anniversary concert party.  Billy Morrison tweeted that he and a bunch of his All-Star friends would be performing there on a Saturday.  I asked if I could shoot the event, and he almost instantly said yes.  I remember doing some imaginary cartwheels and being once again super grateful to Billy.  From the moment he replied, to the moment before the show began, I was all smiles.  Actually, right before the show it was more like the 4th of July in my tummy, but still smiles.  So how was the show?  Let me start with who was there. The All Stars consisted of, Steve Stevens (Billy Idol), Carla Harvey (Butcher Babies), Billy Duffy (The Cult), Erik Eldenius (Billy Idol), Phil Buckman (Filter), Grace McKagan (Pink Slips), Sebastian Bach (Skid Row), Jeff Scott Soto (Talisman, Journey…), Taylor Hood, Steve Vai (Frank Zappa, Whitesnake, Meat Loaf…), Stephen McGrath (Billy Idol), BILLY MORRISON (Billy Idol, The Cult, Camp Freddy, Royal Machines, Circus Diablo), and BILLY IDOL!
I don’t know about you, but having Billy Idol and the rest of the All Stars perform less than a foot away from me, is not my normal Saturday night.   All the anticipation and fireworks were well-merited.  Another highlight for me was when Steve Vai came on. The moment felt pretty magical.  Shoot! It was all pretty rad.  Rad and freaking sweaty.   God, I was so hot.  There was a point in the show where I thought I was going to die from the heat. I felt like someone had dropped a never-ending bucket of sweat on me.  I couldn’t cool off.  I was so hot, I had to do the crouching tiger, hidden bird, to fan myself.  It also took me at least a couple of days to get my hearing back, but, again, it was all worth it.  (Another side note: although there were 3 Billy’s that night, I think the place would have spontaneously combusted had they all hit the stage at the same time.  So for safety reasons, only two can perform at the same time. Kidding. Or am I? Ha!)
On the bill that night was also a cool band called the Kansas City Bankroll (I was a bit mesmerized by how much the bass player rocked that gigantic bass).  It was awesome to witness. Lastly, the always rocking Abby Gennet and her band, Slunt, also performed.  So yes, that night will go down as one of my favorite nights at the Viper Room, ever.  Once again had it not been for Billy Morrison, I would have missed it all.  I really have to thank him for always being super awesome to me.  I would have said thank you after the show too but I was all icky and sweaty, yuck.   This is where the story I shared earlier totally kicks in.  If people don’t know me, they would think that I’m constantly kissing his ass.   And here is the truth, the dude is super talented (he paints, DJ’s, and acts too).  He has always been a total sweetheart to me. My camera ADORES him (seriously check out all my Billy Morrison pictures). And he has made it possible for me to shoot some of my favorite nights on this planet.  How could I not be all about Billy???  Even Dave Navarro once joked, “You’re always at Billy’s side of the stage!” Can you blame a girl?  So if anyone thinks I’m sucking up or whatever, I don’t care.  The truth is, the dude ROCKS, and I genuinely think the world of him. So there :-).
More gratitude:  Because I’m on this thanking bit, there is one more person that I owe a huge note of gratitude towards.   Years ago, before I quit taking pictures, he offered to help me build my website.  I didn’t have money, I was in a really weird place, and then I went into a deep depression and kinda quit everything.  Every once in a while he would check in to see if I was still taking pictures.  He always believed in me, even when I didn’t.  He’s one of those people who I thank my lucky stars for having met.  When he saw that I sorta started sharing pictures again, and when the whole Juliette Lewis regraming one of my pictures madness happened (the power of one regram was crazy), he convinced me to put up this site. Within a day or two, he had it up and running.  Thanks to him this site exists.  And thanks to him, the dream lives on.  Thank you Robert Chafino for being one of the most amazing humans I have ever met.  I said this a million times, and I’lll say it again, I may not be lucky with money or love, but I have the most amazing friends ever. Including my editor of this site, and another one of my favorite humans ever, the fabulous Lady Anonymous.
This concludes my shout out to the universe and my expression of gratitude, to some of the most extraordinary people I have met.  Go to my gallery to see the full picture sets, and check out their sites to be bombarded with awesomeness.  You will not regret it. PS the entire Viper Room All Stars show is on youtube.  Check it out.