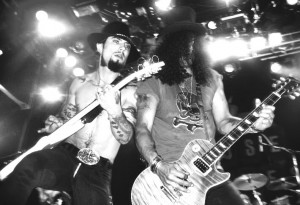 I lost count how many times I saw them. They were one of my favorite addictions. I always said the Camp Freddy experience was like a straight shot of Rock ‘n’ Roll to the veins. My journey with Camp Freddy went from fan girl, to fangirl with a camera, to fangirl with a camera who took really good pictures, to photographer who shouldn’t have smoked some of B-Real’s joint, to “where’s WendyBird?”.  The first private show that I saw them in, I snuck in. It was at the HOB and we literally just opened the door from the restaurant and made our way in. It was afreaking awesome show. I remember fearing that someone was going to catch on, and we were going to be thrown out. But that never happened (side note: one of my pictures from that show taken with a point-and-shoot camera made its way to rollingstone.com). But I digress.  After that, as I got better at my craft, I didn’t have to sneak in any more. Still, those butterflies (actually more like fireworks) in my stomach never left. In my head, I was still that chubby Mexican girl from the SGV who snuck her way in through the restaurant door. Eventually, I let all my fears and insecurities get the best of me, and I removed myself from the scene and thus stopped doing what I was born to do. I will forever regret that. What I didn’t realize back then was that even if I didn’t feel like I belonged, and even if I felt like all the other photographers had more of a right to be there, my contribution was just as valuable, and that I was, via my documentation of it, part of the experience. I didn’t need that shot of Rock ‘n’ Roll because my veins already oozed it. Ha! Maybe I’m going a little too far there, but you get the point. So now that Camp Freddy is over, if I get the chance to be part of the Royal Machines experience, I’m going to pack a ton of Tums and show the world my world, one kickass foto at a time. Here are a few Camp Freddy shots. I’ll post more in the Gallery section of my site tomorrow. Sweet dreams world. XoXo

PS. The moral of the story (besides that Camp Freddy was a freaking kick ass experience) is that there are many people in the world who are going to bring you down, you don’t need to be one of them (this advice was given to me and I’m finally getting it).