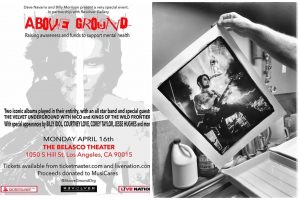 My very first platinum print ever is going up for auction on April 16th at the Belasco Theater for the Above Ground event that Dave Navarro and Billy Morrison organized, and I couldn’t be more excited about it! Over the years, I’ve been asked numerous times about selling some of my work and I’ve always been hesitant for a few reasons. Part of it had to do with me feeling that many printing techniques didn’t feel special enough. Then I learned about platinum printing a couple years ago and my ears perked up, but I never had time to dive into it properly. It was another thing that I always wanted to do but never did. Fast forward to a few weeks ago when I got an email from Dave Navarro (yes, you know that awesome guitarist from Jane’s Addiction and one of my favorite humans) about the possibility of contributing something for the Above Ground charity auction. I knew immediately that I had to do a platinum print. This was the perfect excuse to learn more about it and, finally, do it. What I learned is that it’s going to take me a bit to get it down properly. By a bit, I really mean a long time.  You see, making platinum prints is an art form itself and it takes some time to master the process.  However, I’m super-lucky to know someone who has already mastered it and was willing to let me see the process from start to finish.

The next step was selecting the image.  At first, I wanted to create three prints and let Dave and Billy choose which one would go up for auction. Then I realized how much it actually costs to print each one and that idea got quickly thrown out. So, my image selection became even more critical.  I took two images with me and talked to Larry (my printer/friend) about it.  I loved how dramatic one of the images was, but I wasn’t sure if it would work because it was a bit grainy. The other image was pretty and technically great and I’m sure would have made a fine platinum print, but it was missing some of the drama of the first one. Once we started and I saw the chemicals react with the print, I knew I made the right choice. That moment is probably the most excited I’ve been in a long time and, in my opinion, it came out great! I’m making a limited edition of five.  No more of that image will ever be printed in platinum again.  The other four won’t be available until after the auction and it’s exciting that I already have a list of interested people.

I’m hoping, though, that the first one will fetch a good sum because it’s going to a cause that is dear to my heart.  One hundred percent of the proceeds from the event are going to support mental health via Music Cares.  If you know me, you know how important mental health is to me. My mom has been sick since I was four-years-old, so I’ve been to just about every psych hospital in the LA area and have seen firsthand how vital this cause is. Everything around my life revolves around helping my mom and maintaining my own mental sanity in the process. Some days are super hard and other days you wouldn’t even know there’s a problem. So, when Dave asked me if I would be willing to contribute something, he had no clue how much it would mean to me, I’m both honored and excited to be able to contribute something to this amazing event.  It’s another reason I went with platinum. I wanted the print to be special and I think I achieved that.

Down the road, I plan to do more prints of different iconic images I’ve taken over the years and, hopefully, there will be an art exhibit soon (I’m already manifesting the shit out of it). I love that because this is a handmade item and it’s both expensive and time consuming, none of them will ever be mass produced. No two prints will ever be identical which makes them even more special. And, did I mention, they are platinum!?!  Side note:  I’ve said platinum so many times the last few weeks that you can play a drinking game with it. Ha!

To buy your ticket to Above Ground before it’s sold out click here.